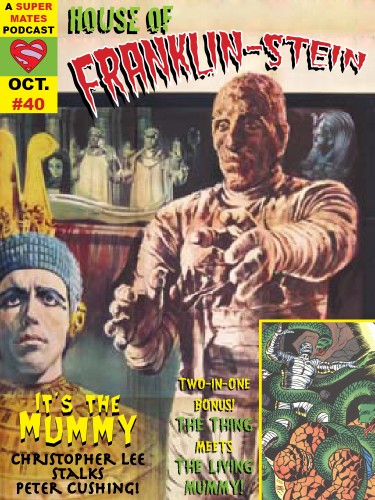 Chris and Cindy dare to comb the tombs of the House of Franklin-Stein, and take a look at 1959’s The Mummy! This Hammer remake stars Christopher Lee in the title role of Kharis, the Mummy who awakens from his eternal sleep to exact revenge on those who would dare desecrate the rest of his princess, namely Peter Cushing!

Then, it’s Clobberin’ Time! The Super Mates review Marvel Two-In-One #95, by David Anthony Kraft and Alan Kupperberg. When his girlfriend Alica is possessed by an ancient Egyptian power, the ever-lovin’, blue-eyed Thing crosses paths with Marvel’s own Living Mummy! Is this comic worthy enough to be paired with the excellent movie above? Well, no, but its fun to talk about!

Let us know what you think! We’d love to read it aloud in an upcoming episode. Drop us a line in our comments section, or email us at supermatespodcast@gmail.com. If you’re listening on iTunes, please consider leaving a review of our show! We’re also on Facebook!

Next time: We dare one more trip to the House of Franklin-Stein, to discuss the 1943 underrated gem, Return of the Vampire, starring none other than Bela Lugosi! Plus an epic comic to wrap things up!!!

Gimme That Star Trek Ep.50: Starfleet Captains Hot or Not?