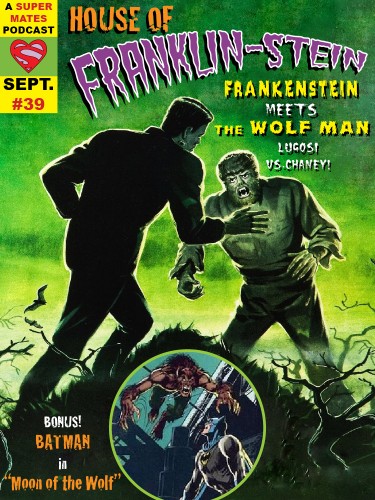 Chris, Cindy and son Andrew dare to venture once more into The House of Franklin-Stein, this time to discuss the classic Universal Monster mash-up, Frankenstein Meets the Wolf Man! The monster rally starts here, as cinema’s greatest lycanthrope Larry Talbot (Lon Chaney, Jr., of course!) seeks an end to his undying curse. Along the way he encounters none other than the Frankenstein Monster, played this time out by Bela Lugosi himself! You just know an epic battle between these two beasts is a’comin’, but is it any greater than the battles behind the scenes?

Then the intrepid trio dares to comb their dusty longboxes to pull out Batman #255, featuring “Moon of the Wolf” by Len Wein, Neal Adams and Dick Giordano! The Caped Crusader encounters a peeping tom in a furry mask…or is it a mask? Batman soon finds out when his old foe, Professor Milo unleashes a savage werewolf upon him! Plus, a look at the episode of Batman: The Animated Series that adapts this story!

Let us know what you think! We’d love to read it aloud in an upcoming episode. Drop us a line in our comments section, or email us at supermatespodcast@gmail.com. If you’re listening on iTunes, please consider leaving a review of our show! We’re also on Facebook!

Next time: It’s Hammer Time once more, as we pay tribute to Christopher Lee by looking at his 1959 starring role in The Mummy! It’s Lee versus his old friend Peter Cushing once more! Plus, a mummified comic!

Midnight 28: SWAMP THING #5 and The Spectre from ADVENTURE COMICS #435

oHOTmu or NOT Ep.59 Supplemental