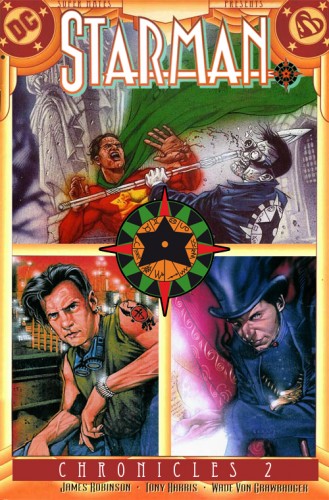 Chris and Cindy journey back to Opal City, and beyond, to examine Starman #4-6. Jack Knight settles into his role of Starman, but learns that weirdness follows him wherever he goes. A chance encounter with a magical Hawaiian shirt leads to a confrontation with a gunman…and a resolution no super hero fan saw coming.

Then Jack has a chat with his brother David…who is dead. The two Knight boys bury the hatchet…and re-bury some bodies as their discussion leads to a full-blown Cosmic Rod slobberknocker.

Things settle down a bit, so Jack delves into the Shade’s Journal, for our first of many trips into “Time’s Past”.

Chris’ guest spots on the following shows are now available:

Be sure to let us know what you think! Let your voice be heard! We’d love to read it aloud in an upcoming episode. Drop us a line in our comments section, or email us at supermatespodcast@gmail.com. If you’re listening on iTunes, please consider leaving a review of our show! We’re also on Facebook!

Next time: We Wonder-Spin into DC’s brand-spankin’ new Wonder Woman ’77 Special, based on the classic Lynda Carter TV series. Plus, the second season premiere episode is discussed, where Princess Diana enters the disco era!

Panel by Panel: The Spooky Flashlight