What is the best superhero movie from Marvel or DC? We've all wondered at one point or another, and we aim to find the answer!

Coming in June, it's the MARVEL/DC SUPERHERO FILM BRACKET (LIVE ACTION)! 64 films from the big two comic publishers go head-to-head in this bracket fight decided by four panelist and moderated by The Irredeemable Shag! And YOU can win FIRE & WATER merch if you guess the most match-up results correctly! Here are the opening bouts! 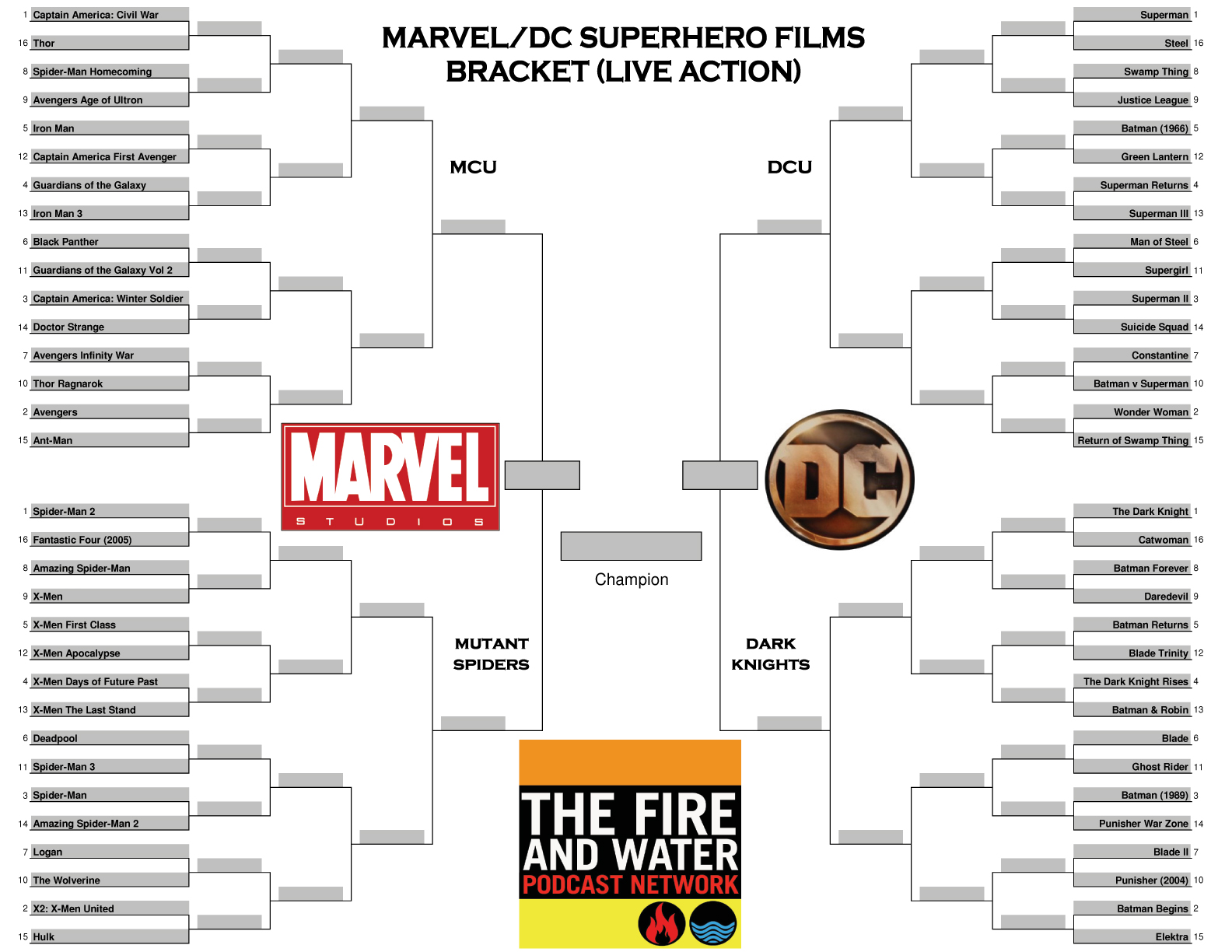 Grab a copy of this sheet, fill it out completely and send to The Irredeemable Shag before June 7, 2018 to enter. One point per match-up correctly entered. Ties broken by coin flip/dice throw. Identity of panelists secret until broadcast. Panelists film criteria entirely their own. Winner announced during the actual bracket podcast released in mid- to late-June.

We're confident some folks will take exception to the bracket above.  We all have our own favorite superhero films, and your favorite may not be represented as you'd prefer. And you folks love to debate and complain (it's one of the things we geeks do best). Therefore, here is an exhaustively detailed explanation for how this bracket was determined. Once you've read the bracket's complete history, feel free to complain in the comments like you were going to anyway.

HOW THE SAUSAGE IS MADE

The bracket was created by a committee of three individuals, none of which will be panelists on the actual episode where the films are ranked.  The only overlap is The Irredeemable Shag who served on the committee (but didn’t vote to rank the films) and will serve as the moderator on the actual bracket episode.

First, we listed every Marvel and DC superhero movie.  From there we identified which really qualified as DC or Marvel universe comics and/or movies.  Those eliminated are listed at the bottom of this info.

Second, we created four quadrants for the bracket. Some of these were obvious, some were necessary due to the number of films (far more Marvel superhero films than DC superhero films).  Quadrants are:

Third, we researched several websites that ranked the top superhero movies of all time.  We settled on four websites that seemed to judge based upon reasonable criteria. Then pulled the ranking for each movie from the four websites (we eliminated all the non Marvel/DC movies, like “The Incredibles”, to establish consistent rankings to compare). The four scores for each film were averaged to establish one score for each movie.

Then the two committee members (not Shag) individually ranked each of the films in each quadrant.

The final seeds were calculated by averaging: the website scoring (weighted at 50%) and the individual rankings from the two committee members (weighted at 25% each).  The resulting scores were the seeds for each of the four quadrants.

Each quadrant had more than 16 films, therefore we had to eliminate some with the lowest scores.  We did make a few exceptions from the scoring to avoid eliminating the only entry for a particular character. For example, in the "Dark Knights" quadrant, we decided to keep "Catwoman", even though the film had the lowest score of that quadrant.  That film was the only standalone representation of the character on the list. Instead we removed the next lowest movie, "Ghost Rider: Spirit of Vengeance" which already had another film representing that character ranked higher. The other exception was “Steel”, again the only representation of the character even though it had the lowest score of the “DCU” quadrant.  Therefore, we eliminated the next lowest film, “Superman IV: The Quest for Peace” instead as there were already Superman films ranked higher.

Here are the films that were eliminated in the initial selection of movies:

Here are the films that were eliminated due to lowest ranking in the quadrants after establishing the seed scores:

Finally, the seeds within each quadrant were bracketed using traditional sports bracket match-ups (i.e. #1 vs #16, #2 vs #15, etc)

Good luck to those that enter, and may the best live action superhero movie win!